Superkart : Elkmann under the heat at Nogaro (France)

On Friday, the rain was invited all over the south-west of France which did not encourage competitors to take advantage of the many sessions of training allocated to find the right set up. The weekend, the crowd and the heat were there. The British Jason Dredge, one of the attractions of the Championship discovered the circuit. He has going off the track, which prevented his set-up. In summary, the German Peter Elkmann dominated the event, the Frenchman Alexandre Sebastia did not get all the points he deserved, the Swede Ingvar Bjerge was one of the surprises of the weekend. 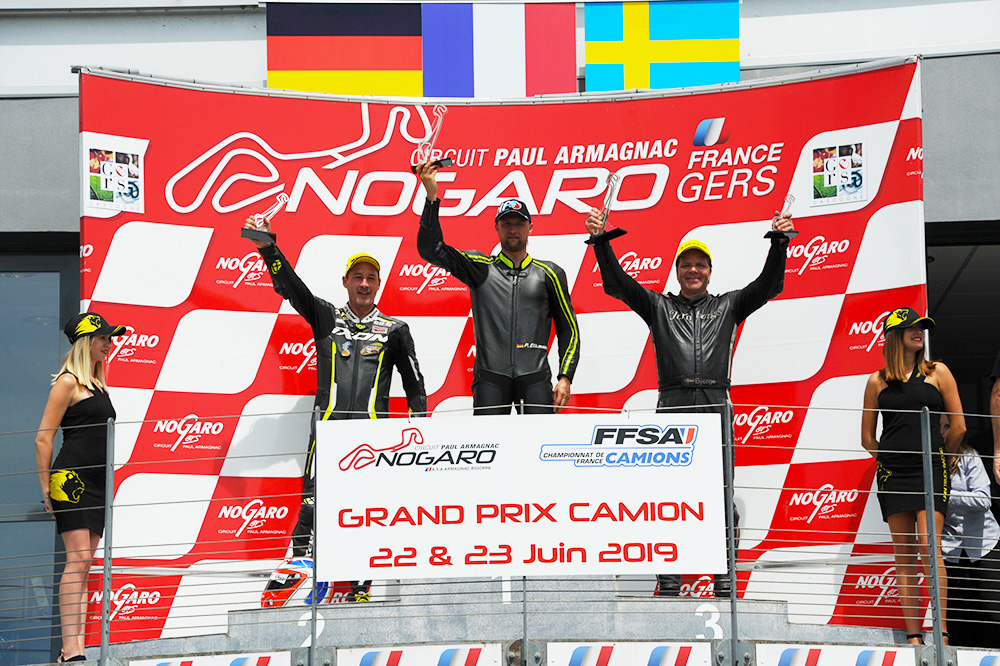 In qualifying, Elkmann (Anderson /VM) achieved the pole by repeating at each session an identical time (1'23''727 '' ') one tenth off the record set last year. Alexandre Sebastia (Anderson / DEA) did not force provided he got a place in first row. He easily did it. He preceded Emmanuel Vinuales, the previous European Champion coming back, who had cared for his chassis but was facing successive engine failures. Jaime Zuleta (MSKart /VM) completed the second row.

In race 1, Sebastia makes a great start, he allows himself to move ahead of Elkmann at the end of the first lap, both preceding Vinuales, which follows suit. Further Zuleta leads the pursuit in front of Bethfort. (PVP/PVP) more and more confident after Donington.
The Dredge’s engine seized. Sebastia remains in contact with the leader but in the 6th lap an accident is to deplore, the red flag was required. At the restart behind Safety, Sebastia begins to feel box problems, he will soon give up. Only Vinuales distantly follows Elkmann, Zuleta is even further but with margin on Bjerge (Anderson/FPE). Beyond, it was the fighting between Christophe Grenier (MSkart/VM), Johan Lamalle (MSkart/VM) and a duo of independents, Éric Confalonieri (PVP/DEA) and Mario De Oliviera (MSKart/VM). Vinuales will be later disqualified (Engine).

In race 2, Dredge starts with delay. Elkmann takes the lead and stay ahead until the checkered flag. Alexandre Sebastia executes again a very quick start, all the more remarkable that it left this time from the bottom of grid. He overtook the ones and the others in a flash. Better, he came back at a cable away from the leader. However, his tires are deteriorating too quickly. From the halfway, he only seeks to maintain the gap with Elkmann. It is at the same moment that Zuleta (3rd) stopped (Loose radiator hose).
Far behind a group of pursuers comes alive. Thus 4th, Confalonieri in progress is overflowed by Bjerge which makes double hit, recovering the last place of the podium. The persevering Lamalle in the last round overtook Confalonieri for the 5th place win. Several seconds further, Dredge have gradually caught up his initial delay and then moved up inside the hierarchy. On the podium, Bjerge was doubly rewarded with the new trophy of the best Gentleman (Special Ranking). Next meeting ; Dijon on June 21 &22
JCB
---------------.
Results and Standings
Race 1: 1. Peter Elkmann, 2. J. Zuleta, 3. I.Bjerge, 4. C.Grenier, 5. J.Lamalle, 6.E.Confalonieri, 7.M ;De Oliveira M., etc.
Race 2: 1. Peter Elkmann, 2. A.Sebastia, 3. I.Bjerge, 4. J.Lamalle, 5. E.Confalonieri, 6.J.Dredge, 7.C.Grenier, etc.